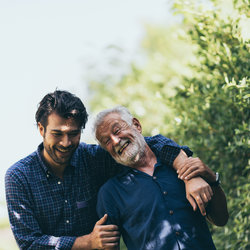 Back in August 2020 James* contacted the service to get support for his 85 years old father who was suffering from dementia and had been smoking for over 60 years and never managed or tried to stop smoking.

His family members were very concerned about the additional health issues related to smoking and his GP advised James to contact the stop smoking service to get support.

James was the main carer for his parents, so we were able to discuss his fathers quit plan.

The first quit plan was based on using champix because he thought this would be a better plan to gradually reduce the number of cigarettes he smoked.

By week 3 James's father had managed to reduce the amount he was smoking but in the evening he was struggling with cravings and was frustrated that his cigarettes will run out and did not manage to stop smoking, so we went over alternative nicotine products. We decided to try patches and the inhalator.  We set him up on the Harm Reduction Plan so he was able to get the products for a longer period of time and he did not have the pressure to stop smoking within a set time frame.

By week 4, using this new combination and with the help of his family reminding him daily on how to use the inhalator and support from the stop smoking advisor James's father manged to stop smoking.

Towards the end of December, we reviewed his plan with a view of reducing doses of the patches. Sadly, around the same time James's father's wife passed away and it was a really difficult time for him, and his family and he was finding it difficult to understand what was happening.

He was asking for his wife every day and was always anxious as he did not understand what was going on. He also started asking for cigarettes, however with the support of his son and our service we managed to make him understand how well he had managed without smoking.

This support has continued to present day from the service. James's father has recently undergone a major eye operation and is now recovering well.  James has found the weekly support and information we provide very helpful in helping his father to quit. This change in his fathers lifestyle has improved his health and he has thanked the service for all the support we have provided them from day 1 and not giving up on his father and understanding his condition.  James's father has managed to stay smoke free for over 12 weeks now.

“It’s been a huge life changing experience, because it was one to one personal touch."

*Names have been changed for client confidentiality reasons.